Muscat is the capital of Oman. It is also the seat of government and largest city in the Governorate of Muscat. According to the National Centre for Statistics and Information (NCSI), the total population of Muscat Governorate reached 1.28 million as of May 2015.‪The metropolitan area spans approximately 3,500 km  (1,400 sq mi)‪ and includes six provinces called wilayats. Known since the early 1st century CE as an important trading port between the west and the east, Muscat was ruled by various indigenous tribes as well as foreign powers such as the Persians, Portuguese Empire and the Ottoman Empire at various points in its history. A regional military power in the 18th century, Muscat’s influence extended as far as East Africa and Zanzibar. As an important port-town in the Gulf of Oman, Muscat attracted foreign tradesmen and settlers such as the Persians, the Balochis and Gujaratis. Since the ascension of Qaboos bin Said as Sultan of Oman in 1970, Muscat has experienced rapid infrastructural development that has led to the growth of a vibrant economy and a multi-ethnic society.

The rocky Western Al Hajar Mountains dominate the landscape of Muscat. The city lies on the Arabian Sea along the Gulf of Oman and is in the proximity of the strategic Straits of Hormuz. Low-lying white buildings typify most of Muscat’s urban landscape, while the port-district of Muttrah, with its corniche and harbour, form the north-eastern periphery of the city. Muscat’s economy is dominated by trade, petroleum and porting.

The day May 31, 2015 Ing. Roberto Rey visited the Sultan Qaboos Grand Mosque in Muscat: an extraordinary example of modern Islamic architecture, symbolizing in a certain sense the rebirth of the country , combined with his desire for modernity in step with the ancient traditions . And ‘ the only mosque in the country ( and one of the few in the Middle East ) open to non- Muslims .

Outside, the huge building is striking for its whiteness , with the refined architecture of white marble , surrounded by 5 minarets representing the moments of daily prayer .

You enter barefoot in the prayer hall and one is amazed : the huge hall can accommodate 6,600 people and impresses with unparalleled sophistication .

The floor is entirely covered with a Persian rug handmade of 4,200 square meters ( 70×60 m ) , weighing 21 tonnes, the largest in the world , while a chandelier of Swarovski crystals , immediately catches the attention , with its height of 14 meters and over a thousand bulbs .

The entrance to the Sultan Qaboos Grand Mosque is free and requires a dress code : pants and long sleeves and women must cover their hair .

The experience is very interesting in terms of cultural, architectural and artistic : open from Saturday to Wednesday , from 8 to 11 . 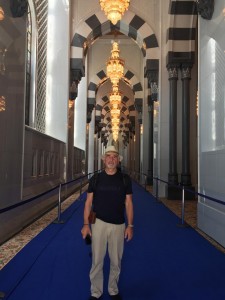 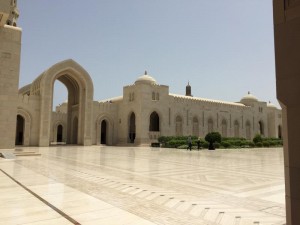 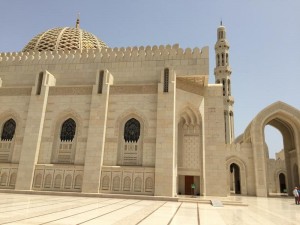 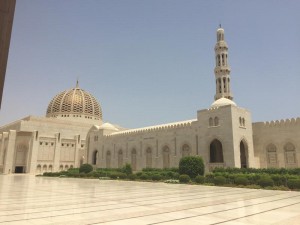 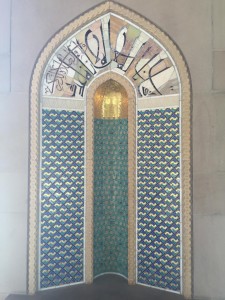 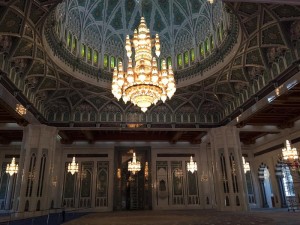 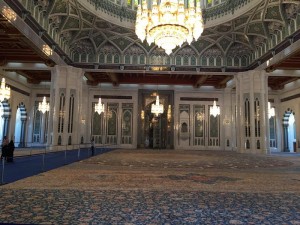